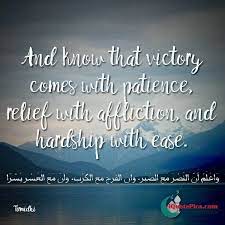 “But if they turn away, [O Muhammad], say, ‘Sufficient for me is Allah; there is no deity except Him. On Him I have relied, and He is the Lord of the Great Throne.” Holy Qur’an 9:129.

Just as supplication (​duʿāʾ) is a means to the desired outcome, so it is with reliance on Allah (tawakkul)​. Allah answers the call of those who place their trust in Him. He is a means to the desired outcome. He repeatedly commands us in the Qur’an to place our trust and reliance on Him. Hence,​tawakkul is also an act of submission to the Master. It is the foundation and perfection of our belief and worship in the Oneness of Allah (​tawhīd ​) by not relying on anyone else: “But if they turn away, [O Muhammad], say, ‘Sufficient for me is Allah; there is no deity except Him. On Him I have relied, and He is the Lord of the Great Throne.” Holy Qur’an 9:129.

By submitting one’s heart and giving complete authority to Allah, the believer gains the love of Allah: “Indeed, Allah loves those who rely [upon Him].” Holy Qur’an 3:159.  Thus,​tawakkul brings calm to the heart – it is no longer perturbed by the tremors of life. ​Tawakkul is the source of contentment, ease, and ​ protection Allah grants to the believers, relieving them from fear and doubt. It is a means to come closer to Allah and to raise one’s level of faith (​imān) and certainty (​yaqīn). ​

“No disaster strikes except by permission of Allah. And whoever believes in Allah, He will guide his heart. And Allah is all-Knowing. And obey Allah and obey the Messenger; but if you turn away, then upon Our Messenger is only [the duty of] clear notification. Allah – there is no deity except Him. And upon Allah let the believers rely.” Holy Qur’an, 64:11–13.

Thus, if one is tested with hardship, should worldly provision be taken away, or if one does not see the desired or immediate outcome of a particular supplication (duʿāʾ)​, one remains optimistic that Allah’s treasures are boundless and He will remove hardship and replace any loss with something better.

Abū Saʿīd al-Khuḍrī reported that the Holy Prophet Muhammad (PBUH) said, “No Muslim makes supplication – unless he is someone who has cut off his relatives – but that he is given one of three things: either his supplication is answered quickly, or it is stored up for him in the next world, or an evil equal to it is averted from him.” It was then said, “Then many supplications will be made.” He replied, “Allah has more still to give.”  Hence, perhaps the greatest  ​fruit of tawakkul is that one is satisfied with the outcome, regardless of its specifics, knowing that it comes from the One who loves His servants and knows what is best for them.

Scholars divide people into three categories in terms of their approach to reliance on God (tawakkul). The first type of person is one who relies wholly on Allah, without personally asserting any effort towards the end goal himself. The term used to describe this concept is tawākul. ​This is contradictory to tawakkul as understood from the Qur’an and Sunnah. The noble Companion of the Prophet, ʿAbd Allah Ibn ʿAbbās, reported that the people of Yemen travelled for Hajj without sufficient provision, claiming to depend solely on Allah to provide for them. When they resorted to begging the people of Medina to take care of them, Allah revealed the verse, “And take provisions, but indeed, the best provision is fear of Allah.”

This is exemplified in the context of the current global pandemic by those who claim to trust Allah to protect them from its harm, while they themselves refrain from taking the necessary prescribed precautions of social distancing and sheltering in place in order to prevent the further spread of the virus.

The second type of person takes the means to achieve the desired outcome, while relying solely on those means, and not on Allah. The Prophet Nūḥ (AS) could not convince his own son to seek refuge in Allah from the flood, in the safety of the ark. His son defiantly said, “I will take refuge on a mountain to protect me from the water.” [Noah] said, “There is no protector today from the decree of Allah, except for whom He gives mercy.” And the waves came between them, and he was among the drowned. Holy Qur’an, 11:43. This action is sinful because it goes against tawḥīd for one to rely on other than Allah, and therefore, it contradicts tawakkul. This is likened to one who seeks the recommended or necessary medical treatment for an ailment. However, he places his trust solely on the means – the medicine and the doctor – but does not acknowledge or trust in Allah as the One who ultimately provides the cure through those very means, giving them their effectiveness and potency.

The third group of people are those who take the necessary means to achieving the desired outcome and place their trust in Allah to grant them success. This is the correct understanding of tawakkul as taught and practiced by the Holy Prophet Muhammad (PBUH) and every Prophet before him. One might wonder why Maryam was instructed to shake the date palm as she was in the throes of giving birth. “And shake toward you the trunk of the palm tree; it will drop upon you ripe, fresh dates. ​So eat and drink and be content.” Holy Qur’an, 19:23–26. ​  ​It was, no doubt, her reliance on Allah and His Divine wisdom in directing her to that action that provided her with the necessary means to give her ease in her time of difficulty.

Likewise, during any time of uncertainty and fear, the people of tawakkul are those who remain steadfast in their hope in Allah to bring them through the test, while they use every permissible means to achieve that end. Hence, in the context of our current circumstances, we must remain optimistic and completely trust that Allah will bring us relief from all difficulties and hazards. At the same time, we must make every effort to take the prescribed precautionary measures and use this time wisely to engage in and increase our acts of worship like supplication (duʿāʾ) seeking forgiveness (​istighfār)​, giving charity (​ṣadaqah), and being of service to others to the best of our ability.

The great scholar, Ibn Taymīyah summarized this concept as: “​Tawakkul comprises of reliance on Allah, in order for Him to help the person do what they are ordered to do, as well as reliance on Allah in giving the person what they cannot achieve. ​Istiʿānah (seeking help) is in actions, and tawakkul is broader than that.”  Therefore, making duʿāʾ is an important and ever-present aspect of the means one takes in exercising tawakkul​. It is also important to note that reliance on Allah is essential for all matters, both worldly and religiously- to seek a good outcome in this world and in the Hereafter.

The Qur’an and Sunnah are replete with accounts and valuable lessons about tawakkul, illustrating how our greatest role models understood and implemented it in their lives. Prophet Ibrāhīm (AS) found coolness and tranquillity in the middle of the fire when he placed his trust in Allah, reciting the words, “Allah (Alone) is sufficient for us and He is the Best Disposer of affairs.” These were also the words of the Prophet Muhammad (PBUH) when he and his companions were informed of a great army gathering against them at Uhud.  He made sure to take the necessary means available—strategic planning, armor, and duʿāʾ as the means to seek the help and protection of Allah.

The sea itself was made the path to safety for the Prophet Mūsá (AS) when he was commanded to strike it with his staff. We see the certainty and tawakkul of Mūsá (AS) when he said, “Nay, surely! With me is my Lord, He will guide me.” Holy Qur’an 26:62. As difficult as it is to imagine, the mother of Mūsá (AS) was divinely inspired to place her infant in a river in order to save his life. How amazing is His wisdom that Allah then kept Mūsá (AS) safe, raising him in the home of the very same tyrant from whom she was desperate to secure his escape.  Holy Qur’an 28:7–13.

These are historic accounts. Although we may be blessed with the comforts of life and, therefore, not fully comprehend the extent of the adversity these exemplary believers overcame with tawakkul, they provide consolation and hope to us all. To those among us who find themselves in the midst of a storm, be it calamity, injustice, loss of life or provision, place your trust in Allah and stay the course with hope and confidence to weather the storm, and know that Allah is with you, too.  To be concluded next week in sha Allah.

IN TIMES OF HARDSHIPS AND EASE, REMAIN CALM AND RELY ON ALLAH – PART ...
Scroll to top