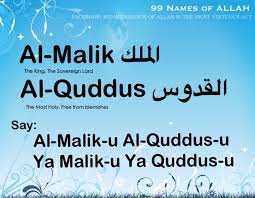 He is Allah, other than whom there is no god, the King (al- Malik),

Allah, blessed and sanctified be His Names, is the only Sovereign Lord of all His creation. He is the Lord of the worlds and of history, of power and holiness. His power and glory are ever-lasting and His holiness is forever proclaimed by the pure angels, who continuously hymn His praise and proclaim His holiness. (Holy Qur’an: 2:30).

The Qur’an insists that absolute power and sovereignty belong to Allan alone. Thus, when claimed by any other being, absolute power becomes self-deluded arrogance and absolute sovereignty becomes tyranny, the worst form of idolatry. Allah calls any earthly king or ruler who claims for himself these Divine prerogatives taghut, which means both Satan and an evil idol. Those who accept the claims of such an evil ruler are idolators, the worshippers of Satan. Allah says: ‘Allah is the master (wali) of those who have faith. He brings them out of the darkness into light. But those who reject faith, their master is Satan (al-taghut). He brings them out of the light into darkness; these are the inmates of the Fire; in it they shall dwell forever. (Holy Qur’an, 2:257).

The root meaning of the word taghut is transgression, overstepping one’s limit, being unjust or unbalanced, or falling into blind error. All these are signs of false pride; hence the application of the term taghut primarily to Satan. The Qur’an gives many examples of such satanic kings or rulers. Chief among these is Pharaoh whose extreme arrogance led him to proclaim: “l am your lord most high”. (Holy Qur’an, 79:24). The opposite of the characteristics of taghut is Islam total surrender of one’s life and will in absolute humility to Allah: Pharaoh rejected Islam to Allah and chose instead Satan as his master, and thus his evil destroyed him. He and other wicked kings and rulers of bygone ages are presented by Allah in the noble Qur’an as examples for future generations.

Allah is the King of the worlds and humankind are His stewards (khulafa) on earth. The power exercised by kings and rulers is not theirs, but it is given to them by Allah. As Allah is the All-Merciful King of His creation, they too must emulate Him in showing mercy to their subjects. Allah is the Just King, and they must, as His stewards, judge justly among men. Thus, Allah said to Prophet (David), O David, We have made you a khalifa, therefore judge among men with justice. (Holy Qur’an, 38;26).

True Islam, or submission to Allah is the active recognition in word and conduct of Allah’s sovereignty. This recognition is not the resigned acceptance of subjugation to a blind and capricious power. It is rather to recognize Allah, the All-Merciful and Compassionate Lord of all beings as the Lord of history.

He alone directs the course of history to its final consummation, and in the end He alone shall be the ‘King’ or ‘Master’ of the Day of Judgement. Allah’s sovereignty means that He is the King and Master over all powers and authorities in the heavens and the earth. A true and righteous Islamic rule, whatever its nature may be is one, which recognizes Allah as King and Master over it. It is to humbly recognize that in His hand is all dominion and the power and wisdom to grant it to anyone of His servants He chooses. This acceptance of Allah’s kingship is expressed in His saying: “Say, O Allah Master of all dominion, You grant dominion to whomever You will and You seize dominion from whomever You will, You exalt whomever You will and You abase whomever You will. in Your hand is all good and You are powerful over all things”. (Holy Qur’an, 3:26).

In His wisdom, Allah coupled His Name ‘the King’ with His Name ‘the Holy One’ in order to teach His human creatures that power must always be tempered with mercy and compassion. Kingship is an attribute of majesty and power, while holiness is an attribute of beauty and mercy. Allah is therefore, the King of power and majesty and the Holy Lord, Creator and Preserver, in mercy and love of all His Creation. Holiness is not an Islamic term meant to characterize things, people or places. Things may be wholesome (al-tayibat) or filthy (al-khabaith), good or bad. Likewise, men and women may be good or evil, righteous or wicked. Allah alone is Holy (al Quddus).

Allah’s holiness is synonymous with His transcendence. The term quddus is an old Semitic word, which signifies special and great power, inapproachability and absolute otherness of the Holy from all other things. It also signifies purity and exaltation. The Holy, moreover, evokes in those who encounter it feelings of fear, awe and even dread. It thus becomes an object of mystery and fascination.

These and other qualities of holiness belong absolutely to Allah alone. For the pious, the feelings of awe and fascination, which they evoke become the basis of fear (taqwa) and love of Allah. They also become a nurturing source of a spiritual life and the framework of worship and faith.

Allah is the King of kings, the Lord of all those who claim lordship. Before His Holy Majesty, all powers are nothing, for He alone is the eternal King of the universe, the Holy Lord and sustainer of all things. Blessed and exalted be His Holy Names. There are those of Allah’s servants, such as the Prophets and righteous friends of Allah, who live continuously in Allah’s holy presence. Upon such favored individuals, Allah sends down His sakinah (holy tranquility), which becomes for them peace and trust in Allah’s mercy and love. It is this holy presence (sakinah) which Allah sent down upon His noble Prophet Muhammad, upon whom be-peace, and through which he consoled his truthful companion Abu Bakr, may Allah be pleased with him, in the cave (al-Ghar) of his hijra. With unshaken faith and trust in Allah’s presence the Prophet declared to Abu Bakr: ‘Fear not; for Allah is with us,’ for Allah’s support powered him with hosts, which others could not see. (Holy Qur’an, 9:40).

Allah is the King of kings, the Lord of all those who claim lordship. Before His Holy Majesty, all powers are nothing, for He alone is the eternal King of the universe, the Holy Lord and sustainer of all things. Blessed and exalted be His Holy Names.