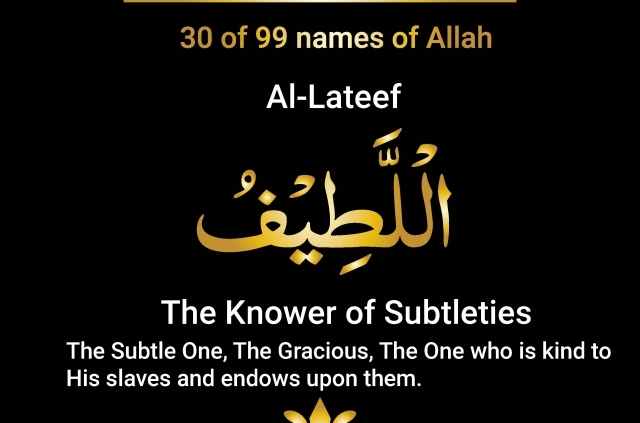 “O my dear son, if something were [even] the weight of a mustard seed and within a rock or [anywhere] in the heavens or in the earth, Allah will bring it forth. Indeed, Allah is Laṭīf (subtle) and Khabīr (Acquainted)” (Holy Qur’an 31:16).

The deeper one’s internalization of Allah’s name Al Lateef becomes, the greater its impact on one’s interaction with Allah and with His creation. The following are but a few qualities that will necessarily manifest in a believer once this blessed divine name has crystallized in his or her heart.

The servants of Al Lateef find that as their knowledge of Him increases, the vault on their negative thoughts is gradually welded shut. This knowledge then unleashes many dormant memories, opening their eyes to the shade of luṭf that has and will continue to canopy their life story. They realize it was Him who sent them into that room moments before the child was hurt, so it will be Him who protects this child when they cannot. They realize it was Him who alerted them to the outlet sparking before the smoke got thick, so it will be Him who exposes the smokescreens that could divert them from His path. They realize that in all these instances in their past, a few seconds later would have been too late, so they welcome their future certain that al Lateef will never be late – no matter what tomorrow may bring.

With the meaning of al Lateef carved into their souls, His servants carry hopes that others consider naive, but they understand that no dreams are impossible for Him to retrieve. As Luqmān the Wise said, “O my dear son, if something were [even] the weight of a mustard seed and within a rock or [anywhere] in the heavens or in the earth, Allah will bring it forth. Indeed, Allah is Laṭīf (subtle) and Khabīr (Acquainted)” (Holy Qur’an 31:16). Picture a speck of dust in the next room, the next house, the next street, the next neighbourhood, the next city, the next country, the next continent, the next planet, the next galaxy—and be certain if Allah wishes, He will extract it at once. Thus is the confidence of the servants of al-Laṭīf; it is not grounded in material means, or morning words of self-affirmation, but in the fact that He Who can capture a tiny seed from the lost corners of a massive universe can direct every treasure their way, even if the factors on hand do not appear to allow for it, if they but knock on His door. (Al-Fīfi, Li-Annak Allāh, 61)

When Umm Salamah’s (Allah be pleased with her) husband passed away, she felt happiness was irretrievable after her loss. The Prophet Muhammad ﷺ counselled her by saying, “Nobody is struck by a calamity, then says as Allah instructed him – ‘We belong to Allah, and we are certainly returning to Him. O Allah, reward me for my calamity, and grant me better than that [which I lost]’- except that Allah will surely do so.” She admits that although she said these words, she could not overcome a question that lingered inside her: “Who could possibly be better than Abū Salamah?” But the days would soon unfold and reveal to Umm Salamah that Al Lateefhad secured for her the finest husband the sun has ever risen upon: the Prophet Muhammad ﷺ himself. (Ṣaḥīḥ Muslim, 2:631–33, nos. 918–19).

In contrast to human relationships, which are often high maintenance, unfulfilling, and erosive of a person’s soft heartedness, a believer’s acquaintance with Allah moistens their spirit and affords them a magnanimous demeanour with His creation. For instance, a believer feels obliged to be a source of gentleness for others, not in light of their treatment of them, but in proportion to their recognition of al-Laṭīf’s gentleness towards them. It was the Prophet Muhammad ﷺ who called our attention to this correlation, saying, “Allah is Gentle and loves [seeing] gentleness.” (Ṣaḥīḥ Muslim, 4:2003, no. 2593). Nobody was ever more observant of Allah’s kind treatment than the Prophet Muhammad ﷺ, and hence his kindness with Allah’s creation was unparalleled. Never once did he avenge himself, nor chastise the ignorant for their blunders, nor had two choices without choosing the option less burdensome on others. He the Prophet Muhammad ﷺ would hear an infant crying during the prayer and shorten it, empathizing with its mother’s distress, (Ṣaḥīḥ Muslim, 1:342, no. 470), and on another occasion question his army for startling a bird by seizing its hatchlings. (Sunan Abū Dāwūd, 3:55, no. 2675) The Prophet Muhammadﷺ positioned gentleness as an overarching virtue that belongs everywhere, saying, “Gentleness is not found in anything except that it beautifies it, and is not plucked from anything except that it defiles it.” (Ṣaḥīḥ Muslim, 4:2004, no. 2594).

Believers being laṭīf in their charity is a fundamental concept in Quranic ethics, as Allah says, “O you who have believed, do not invalidate your charities with reminders or injury” (Holy Qur’an 2:264). This means that being modest about one’s charity is required even after distributing it (no reminder), to not shame the recipient, as is not leveraging that charity to offend or exploit the recipient (no injury). The earliest Muslims exhibited incredible luṭf in their philanthropy, being as discreet as they could, even concealing it from their families when possible. Only upon the death of Zayn al-ʿĀbidīn (Allah be pleased with him), the great-grandson of the Prophet Muhammad ﷺ, did many homes in Madinah realize that it was him who secretly delivered sacks of flour to their doors by night. And when his family disrobed him for the pre-burial washing, they discovered dark calluses on his back from the heavy loads. (Siyar a‘lām al-nubalāʾ 4:393). Others would overpay particular sellers in the marketplace so that for the onlooker it would appear purely transactional, while in reality it was creatively hidden financial assistance. In our times, a brother mentioned that his thoughtful mother would ask her poor neighbour for salt, while she had plenty, simply to keep the latter feeling comfortable to ask the former for her frequent needs. Such ‘givers’ are in reality the greatest recipients, because their luṭf places them at the receiving end of Allah’s love, as the Prophet Muhmmad ﷺ said, “Allah certainly loves the servant who is taqī (pious), ghanī (independent), and khafī (discreet).”(Ṣaḥīḥ Muslim, 4:2277, no. 2965).

When seeking to better people’s profile before Allah, having a gentle demeanour is necessary to help manoeuvre around their defensiveness, and avoid falling into behaviour that would be counterproductive towards our objective. Allah says, “So by mercy from Allah, you [O Muhammad] were lenient with them. And if you had been rude [in speech] and harsh in heart, they would have disbanded from around you” (Holy Qur’an 3:159). Similarly, the Prophet Muhammad ﷺ taught us that “Allah is Gentle, loves gentleness, and grants in light of gentleness what He does not in light of roughness, or anything else.” (Ṣaḥīḥ Muslim, 4:2277, no. 2965).

This may entail amplifying good more than one combats evil, not being forceful with criticism, or aggressive in tone, or impatient with people’s pace to guidance, or otherwise. But in general, exhibiting luṭf in the form of due consideration, and surgical care to not kill the patient, is the common denominator here. Thus is the believer, as the Prophet Muhammad ﷺ said, “The example of the believer is that of the honey bee; it only consumes that which is good and pure, only produces that which is good and pure, and lands without breaking or ruining [anything].” (Musnad Aḥmad, 11:458). May we be people who land gently on the subjects of Allah, extract the best in them, instill the best in them, and never break a single one of them by failing to be laṭīf in how we approach them.

Nothing can be as empowering as knowing that your guardian is al-Laṭīf, who knows your every fear, and how to render it as harmless as a summer breeze. It suffices to rely on Him for impeding these fears from reaching us, or commanding “their flames” which engulfed us to be cool and safe, just as they were on Ibrahīm (peace be upon him).

While some criminals are so crafty that hardly anyone can discover their schemes, the servant of al Lateef sleeps well knowing that his Lord already has. While some tyrants are so powerful that it’s difficult to imagine something stealthy enough to breach their defences, the servants of al Lateef contain their fears and do not cower before them. They remember that Allah said, “And if you are patient and fear Allah, their plot will not harm you at all. Indeed, Allah is encompassing of what they do” (Holy Qur’an 3:120). They remember that when Allah wanted to remove the Prophet Muhammad ﷺ and his supporters from the ravines of Abū Ṭālib, where they had been driven by persecutors and boycotted for three agonizing years, He did not smite the Qurashites with a punishment from the sky. Instead, al Lateef simply sent termites to gnaw away at the pact that was in their possession; a nearly invisible insect disintegrating every oppressive clause in that agreement. (Sīrat Ibn Hishā, 1:376)

During the infamous Mutazilite inquisition under the Abbasids, Imam Ahmad b. Hanbal (d. 855 CE, Allah grant him mercy) was sent to the dungeons for refusing to accept their claim that the eternal Quran is Allah’s created word. His brittle age of seventy years old was irrelevant to those who lashed him mercilessly. One of the floggers said, “An elephant would have crumbled from the intensity of the blows I dealt to Ibn Hanbal. With each strike, I would say the whip would emerge from his mouth this time, due to how severely the flesh on his back was falling apart.” Ibn Hanbal’s situation was absolutely deadlocked; it was a matter of time before he caved to their demands or through martyrdom escaped their hands. But Al Lateef injected His relief into the ordeal with two splendid, subtle gifts. Beyond the prison walls, the Mutazilite judges overlooked a man named ʿAbd Allāh al-Adhrumī (unbeknownst to them, a fearless erudite scholar) and debated him in front of the caliph, not realizing that this would herald the beginning of their end. Within the dungeon, the prison guards overlooked a man named Abū al-Haytham (a thief) who would replenish the Imam’s heroic spirit whenever it was flagging. Thereafter, Imam Ahmad’s son asked his father why he would constantly pray for the forgiveness of this thief. He said, “He bolstered me. He would say, ‘O Imam, the state records document that I endured being flogged eighteen thousand times – separately – while being upon falsehood, so stand firm upon the truth. O Imam, persevere, for if you live – you will live glorified and if you die, you will die martyred.” (Manāqib al-Imām Aḥmad, 450). Neither al-Adhrumī nor Abū al-Haytham were expected factors in this grand ordeal, but al Lateef employed them as the special forces necessary to ‘infiltrate sensitive areas’ and help Imam Ahmad complete his valiant mission.

Upon learning these meanings of the Divine Name al-Laṭīf, a believer should periodically avail themselves long hours with this blessed name, identifying its manifestations in the past, anticipating its involvement in the future, invoking Allah using it, and allowing their tears to wash away the heart’s rust in light of it. O Allah, we testify that you are indeed al-Laṭīf; we implore You by Your mastery of every subtlety, and by Your sublime gentleness – to direct our steps every time the road splits, to guide us through every darkness that blankets us, and to soothe us through our nightmares and our pain.