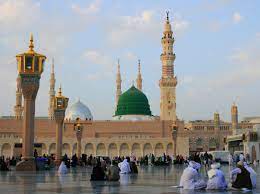 We are in the month of Rabi ul Awwal, the birth month of the Holy Prophet, Muhammad (PBUH). We are therefore, dedicating the reflections of this month to the Holy Prophet. This week, we commence with a three part tribute to the Holy Prophet Muhammad (PBUH) by the late Pakistani Islamic Scholar, Shaikh Abdul A’la Mawdudi  entitled “The Message of the Prophet’s Seerat”, which was delivered in a lecture to the Muslim Students Association of the Punjab  University on October 22, 1975.  Though delivered almost 5 decades ago, the speech is still as fresh and relevant as today.

“I have been invited to speak in this assembly on the Message of the Holy Prophet (PBUH). To deal with this subject in the framework of logic, there is one obvious question which arises first: why the message of the Seerat of the Prophet (PBUH), and none other? Why, in particular, that of the Holy Prophet Muhammad (PBUH) and not that of any other Prophets or the founders of other religions? We must deal with this question at the outset. So that our minds may be fully satisfied that we can, in fact, obtain guidance not from any other ancient or modern personality, but from the character and personality of a Messenger of God alone. And of all the Messengers of God and the leaders of religion, it is the life of Muhammad (pbuh) alone which offers true and comprehensive guidance. Guidance of which we stand in dire need today.

Need for the Guidance of Allah

It is an undeniable fact that the source of all knowledge is Almighty Allah Who made this universe and created man to populate it. Who else but Him can know the realities of this universe? Who else possesses the knowledge of human nature and its true elements? The Creator alone knows His creatures. Human awareness is circumscribed by what has been revealed by the Creator, for man has no independent means of his own to get at the truth.

In this connection, the difference between two different aspects of reality must be fully grasped so as to avoid any fallacy in discussion. There are things which you perceive through the senses, and having gathered a body of knowledge by means of these senses, you can proceed to classify this information with the help of reflection, argumentation, observation or experimentation and to deduce laws from them.

For this type of information no revelation from heaven is needed. This is the province of your personal discoveries, explorations, meditations, reflections, research and deductions. It has been left to you to explore the world around you and discover the forces which operate; to understand the laws under which these realities function, so that you may stride forward along the path of development. Yet in this matter too, your Creator has not deprived you of His help.

All through the course of history, Allah has been unfolding before you, no matter how imperceptibly, His created world through an evolutionary process. He has opened up new vistas of knowledge before you, and at certain points of history He has inspired men to invent new techniques or to discover new laws. But the fact remains that in this domain man must gather knowledge by himself, without the help of a Divine Messenger or a Divine Book. Man has been endowed with all the resources to collect the information necessary in this sphere.

But the second category of reality is transcendental, beyond the reach of our perception; things which we are powerless to comprehend; things which cannot be weighed or measured by scales, nor discovered by pressing into service any of the instruments for acquiring knowledge which we have at our disposal. The theories of philosophers and scientists on this subject are mere conjectures and they do not come under the scope of knowledge. Here our ultimate Realities and rational theories about them cannot be taken as definitive even by the very expounders of these theories. But if the authors of these theories possess any awareness of the boundaries of their limited knowledge, they cannot have faith in the validity of their notions. Nor can they call upon others to believe them.

Need for Following the Precedent of the Prophets (PBUH)

Knowledge is obtained through the Guidance of Allah, for Allah alone is aware of realities. Allah offers this knowledge to man by means of Revelation. Revelation is transmitted to none but the Prophets (PBUH). Allah has never published a Book and, having distributed to each individual, told him to study it to ascertain for himself the reality of his own existence and that of the universe. To realize his role in the practical world in the context of this reality. Allah has always appointed the Prophets to convey this message to man, so that the Prophets should not rest content with merely propagating their mandate, but driving it home, demonstrating it in action, recalling to the right path, those who defy the Divine mandates and organizing the believers into a society where every aspect bears practical evidence of this knowledge.

It is evident from this brief exposition that, for Guidance, we are wholly dependent upon the character displayed to the world by a Prophet of God(pbuh) A non-Prophet who does not believe in a Prophet is not eligible to be our leader, even though he may be a sage, a deeply learned and wise man. This is because such a person bereft of this knowledge is incapable of devising a true and just system of life for us.

Let us now consider the question of why, of all of the venerable men whom we know as Prophets, and all the leaders of religions who conceivably may have been Prophets, we prefer to seek a message from the character of Muhammad (PBUH). Is this prejudice or is there a reasonable ground for doing so?

I submit that there is a rational basis for this. We certainly acknowledge and believe in the Prophethood of all those who have been named in the Holy Quran as Prophets. But, we lack reliable information by authentic sources on their teaching and their character. There is no doubt about the Prophethood of Hadrat Noah, Ibrahim, Ishaq, Yusuf, Moses and Jesus Christ (peace be upon them) and we believe in all of them. But none of the Scriptures revealed to them has come down to us in its original form so that we may benefit from its pristine message. Similarly, the life-history of none of these Prophets (pbut) has been handed down by any authentic means enabling us to follow their example in the various spheres of individual and collective existence.

A person who undertakes to prepare an account of the teaching and characters of all these Prophets (pbut) cannot write more than a few pages and these too, entirely with the help of the Qur’an, for nowhere else is authentic material extant about them except in the Holy Qur’an.

The Jewish Scriptures and the Prophets (PBUT)

It is said that an account of Moses and the later Prophets (pbut) and of their teachings is contained in the Old Testament. But consider the Bible from the historical viewpoint. The original text of the Torah, as revealed to Hadrat Moses (pbuh), had been destroyed at the time of the sack of Bait-ul-Maqdas in 6 BC, and along with it the scriptures of the former Prophets (pbut) had perished. In 5 BC, when the tribe of Israel arrived in Palestine after their release from the Captivity in Babylon, the Prophet Ezra (pbuh), assisted by some venerable collaborators, prepared an account of the life of Moses (pbuh) as well as a history of the tribe of Israel. In this work were incorporated in appropriate places such verses of the Torah as were readily available to the author and his associates.

In the period falling between the fourth and second century BC, Various authors penned down the Scriptures (from which sources we know not) of those Prophets who had preceded them by several centuries. In 300 BC, to cite an instance, an unknown writer wrote a book in the name of Hadrat Yunus (pbuh) and incorporated it in the Bible, despite the fact that Hadrat Yunus was a Prophet of the 8th century BC. The Zabur (Psalms) were committed to writing five centuries after the death of Hadrat Da’ud (pbuh) and to them were added sonnets composed by some hundred poets. We have no knowledge of the sources from which the compilers of the Zubur (Psalms) had gleaned those Sonnets.

Hadrat Sulaiman (pbuh) died in 933 BC, and Amsal-i-Sulaiman (An Anthology of Solomon’s Proverbs) was compiled in the year 250 BC which also incorporated the maxims of several other sages.

In short, no book of the Bible bears an authentic connection with any Prophet to whom it is ascribed. Furthermore, even these books of the Jewish Bible perished at the second sack of Bait-ul-Maqdas in 70 AD, leaving only their Greek translation extant, a translation dating back to the period falling between 258 BC and the first century BC.

In the second century AD, the Jewish scholars prepared a Jewish Bible with the help of manuscripts which had survived the vicissitudes of time. The oldest copy of this Bible now extant dates back to 916 AD. Apart from this, no other Jewish manuscript exists anywhere today.

The Jewish scrolls discovered in the cave of Qumran on the Dead Sea are not older than the first and second century BC, and even those contain a few scattered fragments of the Bible.

The earliest manuscript comprising the first five books of the Bible current among the Samaritans was written in the eleventh century AD. The Greek translation prepared in the second and third century BC was marred by countless errors. A retranslation from Greek into Latin was done in the third century AD. By what standard can we judge this material as an authentic source of the life-histories and teachings of Moses (pbuh) and the later Prophets of the Jews?

Finally, there were certain unwritten legends known as oral law, current among the Jews. For a span of thirteen or fourteen centuries they remained unwritten until, in the later part of the second and the beginning of the third century AD, a priest known as Yahuda B. Sham’un committed them to writing under the title of ‘ Mishnah.’ Commentaries on this work by the Palestinian Jewsih scholars under the name of  ‘ Halaka’ and by Babylonian scholars under the title ‘ Haggada ‘ appeared in the third and fifth century respectively. The ‘ Talmud’ is, in fact, an anthology of these three works. Significantly, authoritative evidence which may reveal the chain of transmission is lacking in the case of all traditions incorporated in these books.  (To be continued next week)